Space Elements has reached an agreement with PlaneWave Instruments to build a CDK600 class observatory system.

The observatory system is being custom built by PlaneWave for an undisclosed location in the Northern Hemisphere, which Space Elements will announce in the coming days/weeks. The primary telescope is a 0.61 meter CDK 24, which is an f/6.5 focal ratio, “Corrected Dall-Kirkham Astrograph” design.

The observatory system will be implemented with a PlaneWave L-600 mount in an equatorial configuration. The L-600 Direct Drive Mount is a massive form arm mount designed specifically for using some of the biggest PlaneWave optical tubes. The 338 lb. mount can support a payload of more than 300 lbs., which will work well for the CDK 24 optical tube being manufactured and installed for Space Elements.

The L-600 uses dual-axis direct drive motors that are also manufactured by PlaneWave. Both motors have On-Axis encoders that have 18 million counts at .072 arc seconds per tick. This ensures that the mount will have sub-arcsecond tracking accuracy over a five minute period and will have a pointing accuracy less than 10 arcseconds with a pointing precision of 2 arcseconds.

The CDK600 Observatory System will be equipped with a Diffraction SBIG Aluma AC4040 CMOS Camera with a front side illuminated (FSI) Class 2 sensor, which allows for image stacking from within the camera among several other features. The camera features a 16.8 megapixel sensor with 9 μm (micron) pixels, adaptive optics capabilities, and is temperature controlled. The imaging sensor is a Gpixel GSENSE4040. The camera will also be fitted with a CFW7-STX 7 position filter wheel, StarChaser off-axis guider and LRGB, OIII, SII, and HA 50MM square filters.

The observatory system will also feature a Takahashi FC-76DS telescope, which features a wide focal length of 570mm. A description of the Takahashi FC series is as follows: “…the FC series are apochromatic refractors with two-element fluorite lenses. The FC series have larger apertures and longer focal lengths than the FS series, and provide outstanding performance both for the visual observer and the digital imager. The FC series has its own dedicated set of reducers and flatteners, and is also able to use some of these accessories from the TOA series.”

The secondary Takahashi telescope will be mounted on the outside arm of the PlaneWave L-600 Mount, which will give Space Elements the added benefit of wide field viewing by way of the FC-76DS 570mm focal length (f/7.5 focal ratio).

The Takahashi telescope will be connected to a QHY600 PH full frame format scientific CMOS camera, with an IMX455 industry grade sensor (Grade-K). The camera is capable of a 3.76um x 3.76um pixel size, with an effective pixel count of 61.17 Megapixels and an effective image area of 36mm x 24mm. The camera system has an electric rolling shutter and has an exposure time range of 40us – 3600sec. The camera also features a built-in Dual Stage TEC cooling system, which features a range of -35C and -30C below ambient temperature. The camera system will also feature a QHY CFW3-L 7 position filter wheel with several Chroma Technology filters such as the LRGB filter set, the H-Alpha (3NM) filter, the O-III (3NM) filter, and the S-II (3NM) filter.

This is a major milestone for Space Elements, as it enables us to enter and contribute to the world of astronomy with professional class instrumentation and optics. We look forward to celebrating first light through these two telescopes later this year.

Photos of the CDK600 Observatory System

The below images show a PlaneWaves CDK600 observatory system being installed at Obstech El Sauce Observatory in Chile earlier this year.

The observatory system is expected to be completed and implemented with a target ‘first light’ timeframe of September 2021.

Unit Conversions for Distance in Python

a company that researches and develops space exploration technology.

to contribute to the fields of space research and product design, space exploration, and extraterrestrial colonization.

to the community through the use of our observatories, scholarships, and more. 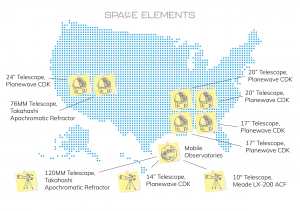 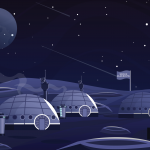 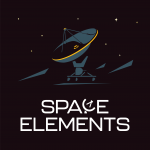 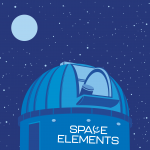 Unit Conversions for Distance in Python